Accelerating Production Design, and Getting It Right 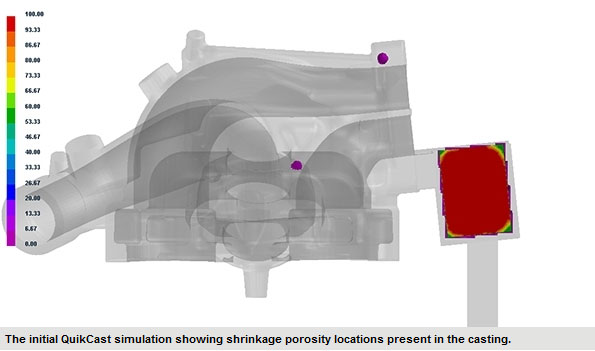 Like every “solution,” this one started with a problem. An unnamed foundry supplying exhaust gas recirculation (EGR) valves to an auto parts manufacturer could not fulfill the order, and that buyer urgently needed to find an alternative source for aluminum castings. Epcor Foundries in Cincinnati was awarded the business. Then, Epcor’s challenge was to get the new part into production quickly, avoiding the quality problems that the previous supplier faced.

Epcor used ESI Group’s QuikCast casting simulation software to evaluate the initial mold design. They were able to identify several areas where the simulation showed porosity would be a problem. Engineers ran a series of alternative mold solutions while adding risers to feed molten metal to compensate for shrinkage in critical areas of the mold.

“We constructed a design that the simulation said would work nearly perfectly,” said Mike Maratta, plant manager for Epcor Foundries. “The result was 98% first time throughput for the initial parts, much better than you would expect to see on a complex part like this prior to simulations.”

Standard mold design — In the standard approach for foundries, patternmakers design molds for castings based on their experience. Epcor once operated that way, too. The molds it designed were validated after a series of trials on the production machines.

A problem with this approach is that the initial design rarely achieves initial success, so several rounds of modifications and retesting are usually required to achieve a cast product that matches design specifications. In the case of the EGR valve, besides adding to the cost of the production program, Epcor simply would not have been able to meet the customer’s aggressive delivery requirements using the traditional approach.

When the EGR valve project developed, Epcor already had been using an alternative approach involving software-based casting simulation to evaluate initial mold designs. Using the theoretical design parameters, they can test alternative solutions in the virtual space, rather than on production machinery (the standard process), followed up by tooling adjustments to prepare for production.

The foundry reviewed different casting simulation software options before selecting the QuikCast module, which simulates the filling and solidification of the casting. In addition to being affordable and easy to use, Epcor appreciated that QuikCast also offers a path to ESI’s more powerful simulation program, ProCast.

Air-back pressure, filters, mold roughness, thermal exchanges, die coatings, and gravity all are accounted for in the simulated casting process. The software offers a range of casting sequences, ranging from gravity sand casting to high- and low-pressure diecasting, and QuikCast features a thermodynamic material database calculator that allows users to enter the chemical composition of the alloy. From these details, programmers are able to obtain the temperature-dependent properties required to accurately simulate a casting process with the exact alloy requested. “We tried QuikCast on a few trial parts and found that it was able to accurately simulate our molding results,” Maratta recalled.

Simulating initial mold design — Paul Kiefer, senior design engineer for Hitech Shapes and Designs (an affiliate of Epcor Foundries) performed the simulation of the EGR valve casting process. He began with a CAD model of the valve provided by the customer, converting it to an STL file and importing that version into QuikCast.

Next, he created the initial design of the mold with the software’s user interface. Then, QuikCast produced a block-structured mesh. Kiefer defined the process parameters along with material properties, fluid and thermal conditions. From that data, the software produced a graphic simulation that helped Epcor to visualize mold filling and solidification, and eventually to view the resulting part.

“When I simulated the initial mold design, it was obvious that porosity was going to be a challenging issue,” Kiefer said. “Viewing the simulation results, I was able to determine that in several critical areas the aluminum was solidifying early in the cooling process, creating isolated pockets of liquid metal that could not be fed as they solidified.

“Most metals are less dense as a liquid than as a solid,” he continued, “so castings shrink upon cooling. As these pockets solidified, it would not be possible to replace the volume lost to shrinkage and the result would be porosity that would create leak paths and potentially cause the part to fail. The porosity would have been detected in physical testing and additional process trials, with a very real possibility that the automobile manufacturer’s line would have to be shut down due to lack of parts.”

Addressing porosity — Once the baseline simulation model was set-up, the next step was to begin changing to the simulation model to eliminate porosity in the virtual casting. Kiefer considered several different approaches to address the problem, including opening up the gate to the part, changing the part orientation, or adding risers. He felt the most promising approach was to add risers, which are reservoirs built into the mold that feed metal to the casting as it solidifies. The result is that shrinkage occurs in the riser and not the casting.

Risers must be designed carefully to work effectively: a riser must cool after the section of the part that it feeds. And, a mold must be designed so that the area of the casting connected to the riser is the last to solidify.

Guided by the simulation results, Kiefer added risers, one at a time, to the areas where shrinkage was predicted to be a problem. Each time he modified the mold design, he reran the simulation to validate the riser design and evaluate the shrinkage of the area serviced by the riser. Successive simulations showed that as the isolated areas in the mold shrank, they drew metal from the risers, which avoided the formation of porosity.

After running three additional iterations, the simulation showed that the problems had been resolved and that the mold would produce quality cast parts consistently.

Showing the simulation to the customer helped Epcor to gain its confidence in the new mold design.

Right the first time — Epcor proceeded to build the mold design as it was projected during the simulation process. Once the design was frozen, the company cut the tooling for the core boxes and patterns and ran a few sample parts. From the beginning, the mold produced good parts that exceeded the customer’s requirements.

Most important, porosity was never an issue during the production sequence that followed. “Our customer was very pleased that we were able to get the new casting up and running so quickly,” according to Maratta. “This helped avoid downtime for our customer, and the OEM, which could have occurred if there had been significant delays during the process. The startup time and throughput levels were where they need to be at the start of a program for a complex casting with tight quality requirements.

“And,” he emphasized, “the customer was very happy with our ability to launch such a complex part without any issues.”

The trial-and-error approach to mold design involves high costs for building and testing gating designs, according to Maratta. And still, he noted the method is often useless for identifying the root cause of a quality problem.

“Computer simulation provides a more effective approach because it makes it possible to look inside the mold and view the filling process one step at a time,” he explained. “It becomes possible to understand the cause of quality problems clearly, and often points the way to corrective actions that can solve these problems.”

For Epcor Foundries, simulation made it possible to evaluate alternative mold designs in a fraction of the time and cost, with the practical result that it can bring new parts into production in less time, at a lower cost and with higher levels of quality — “which helps improve our competitive position,” Maratta said.